From paper mill to present day - over its 156 years the Soho Mill has lived through fascinating times from horses and straw to internet and hi-tech businesses, what a journey!

For over a thousand years the River Wye powered water mills and at one time paper manufacturing was a very important industry in the valley. Soho Mills closed for paper making in July 1984 and the last paper mill - Glory Mill - closed at the millennium with both sites having been developed for other purposes, business and residential.

This synopsis follows the journey that The Soho Mills has taken to arrive at the current day. Extracts have been taken with thanks from G.T Mandl’s “Three hundred years in paper” and a compilation of local research and is accurate to the best of our knowledge.

The Soho Mill was purchased by Thomas, Stephens & Green on the 25th June 1860 for around £8,200.00 and the paper manufacturing business was started. The Mill was setup to manufacture paper from straw brought in from agricultural land around. Mr William Thomas the main drive behind the business resided in the Mill House fronting Town Lane (now offices). He was assisted by his two sons, Edwin & John who lived in the village. The three of them made up most of the office staff for the Mill in its early days. Business was tough from the start but moderate profits were made. In 1863 William Thomas was affected by a rare heart condition and told he must retract from the stress of business. He moved out to Wycombe but retained an active role in the business until his death in 1874. The business became J. & E. Thomas & Green consisting of John Thomas, Edwin Thomas & Roland Green. The brothers fell out around 1884 and Roland made a tough decision to support John, which after many hours of hard negotiation resulted in Edwin being bought out. This lead to the partnership’s demise and the formation of a limited company, Thomas Green Ltd.

It is reported that the firm was in every way progressive, in business, policy and advertising and not frightened to try new technologies. As an example in 1909 Thomas Green processed a shipment of bamboo through its esparto boilers, being the first time it had been used as a raw material for paper making, a forward thinking approach for the time.

Site map of units and businesses

By 1936 Soho Mills under Thomas Green Ltd were among the largest and oldest established paper manufacturers in Buckinghamshire, and also recognised as the leading colour paper producers in the country. This success made the expansion of the mill imperative. At this time some 300 workers were employed on the site and it was decided most of the expansion work, with the exception of the steel could be done locally by the Mills dutiful employees. The work was carried out over a period of two years without serious disruption to the general working of the mill. Their hard efforts were recognised when everyone was invited to a celebration party to mark the completion of the enlargement program. The average weekly production of paper increased from 60 to 100 tons, quite phenomenal.

The extension works included: Large extensions to No1 & No2 machine houses – All buildings now equipped with 5 ton hand operated cranes along with a 1 ton electric crane. Soho Mills now boasts every modern machine available to the paper-making industry. A new cutting house and cutters – a new web stock room amongst many other improvements.

Despite the improvements and their buoyant position it was clear things were changing fast, infighting on the board created irreparable rifts and the business suffered through the late 50’s and early 60’s and it was decided to seek external support. G. T. Mandl was appointed to the board in 1964 and the state of the company’s financial affairs were not looking good, the company was making heavy losses. It was clear big changes were necessary.

Due to falling demand in the market, the production of coloured papers, branded covers and book cloth and other items, meant orders decreased to the extent that it became uneconomical to continue production at Soho Mills. In July 1984 production finally ceased with the loss of 25 jobs. 100 years of paper manufacturing came sadly to a grinding halt.

This invokes the necessity to manage a modern independent industrial estate – the new owners come together to discuss the options and possible solutions. The SMMC concept evolved and is functional today.

The first chairman Huge Evans forms the company and creates a board of directors to answer to the proprietors – a management team is created. Additional car parking space is purchase on Town Lane. New estate lighting is introduced throughout. New estate gates are added with security control. Rubbish skips and paper waist are provided within the service charge. 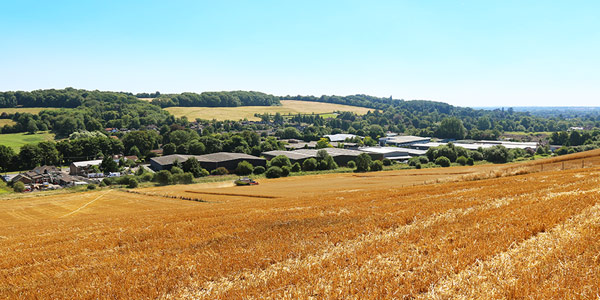 The Soho Mills Industrial Estate as it looks today

To find out more information
please contact us on:

Send us an email